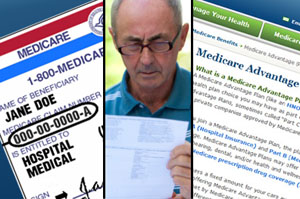 Federal officials this month warned 21 Medicare Advantage insurers with high rates of errors in their online network directories that they could face heavy fines or have to stop enrolling people if the problems are not fixed by Feb. 6.
Among the plans that were cited are Blue Cross Blue Shield of Michigan, Highmark of Pennsylvania, SCAN Health Plan of California as well as some regional plans owned by national carriers such as UnitedHealthcare and Humana.
The action follows the government’s first in-depth review of the accuracy of Medicare Advantage provider directories, which consumers and advocates have complained about for years. More than 17 million Americans, or nearly a third of Medicare beneficiaries, get coverage through private Medicare Advantage plans, which are an alternative to traditional Medicare.
The Centers for Medicare & Medicaid Services in October reported some of the results of the audit, but they had not released names or statistics from the individual plans.
Use Our Content
This KHN story can be republished for free (details).
“Because Medicare Advantage members rely on provider directories to locate an in-network provider, these inaccuracies pose a significant access-to-care barrier,” Medicare officials wrote in a report released last week outlining the problems.
Unlike traditional Medicare, the private Medicare plans typically restrict beneficiaries to a network of doctors and hospitals.
Piedmont Community Health Plan, a small Medicare plan with about 5,200 members in southwest Virginia, had the highest rate of inaccuracies among the 54 insurers examined. Officials found errors in the listings of 87 of 108 doctors checked in Piedmont’s directory, according to the report. Most of the errors involved providing the wrong locations for doctors and doctors who should not have been listed.
Piedmont officials did not return calls for comment.
Piedmont and two other plans with the highest error rates — a WellCare plan in Illinois and Emblem Health’s ConnectiCare subsidiary — were required by Medicare to submit specific business plans detailing how they intend to address the issue.
The individual plans receiving warning letters cover more than 1.4 million beneficiaries. Most operate in numerous states, although CMS generally limited its review to a specific state or geographic area.
The federal review focused on reviewing primary care doctors, cardiologists, ophthalmologists and oncologists. It involved individual calls to check on the listings for 108 doctors in each health plan. “We encountered several instances where a call to a provider’s office resulted in determining that the provider had been retired or deceased for a long period of time, sometimes years,” the report said.
The CMS report found almost half of the 5,832 doctors listed had incorrect information, including wrong addresses and wrong phone numbers. Most health plans had inaccurate information for between 30 to 60 percent of their providers’ offices, the report said. The report blamed the insurers for failing to do enough to keep their directories accurate. Members rely on the directories in both deciding whether to join a plan and then in searching for doctors to treat them.
“We saw a general lack of internal audit and testing of directory accuracy among many” Medicare Advantage organizations, the report said.
CMS’ survey found the most error-prone listings involved doctors with multiple offices that did not serve health plan members at each location.
The health plans were sent the warning letters Jan. 6 and given 30 days to fix the mistakes or face possible fines or sanctions, which could include suspending marketing and enrollment. CMS officials said the report was not issued before the annual open enrollment period — which ended Dec. 7 — because of the need to allow the health plans to review the findings before the report was made public.
Medicare Advantage members have until Feb. 14 to disenroll and join traditional Medicare but after that they are locked into their plan for the rest of the year. Seniors may be able to request permission to change plans on a case-by-case basis by calling 800-MEDICARE.
Another 32 companies with less serious mistakes also received letters saying their directories did not comply with a rule that took effect last year requiring plans to contact doctors and other providers every three months and to update their online directories in “real time.”
ConnectiCare spokeswoman Kimberly Kann acknowledged the difficulties. “Keeping these directories up-to-date is a two-way street and we are working with doctors and other medical professionals to continue providing quality service,” she said.
WellCare spokeswoman Crystal Warwell Walker said the Tampa, Fla.-based company took the survey results seriously. “We modified our data gathering techniques and online reporting options to ensure that when more than one address is listed for a provider, that provider is practicing at that location on a routine basis and access to care is not compromised,” she said.
CMS is continuing its investigation of provider directories this year and expects to examine all 300 companies by end of 2018.
Plans Under Fire
These Medicare Advantage plans received warning letters from the Centers for Medicare & Medicaid Services to immediately fix errors in their provider directories. Some of the insurers are regional plans operated by national carriers, while others are smaller plans but may still operate in more than one area or state. The locations listed here are where federal officials audited their provider directories.